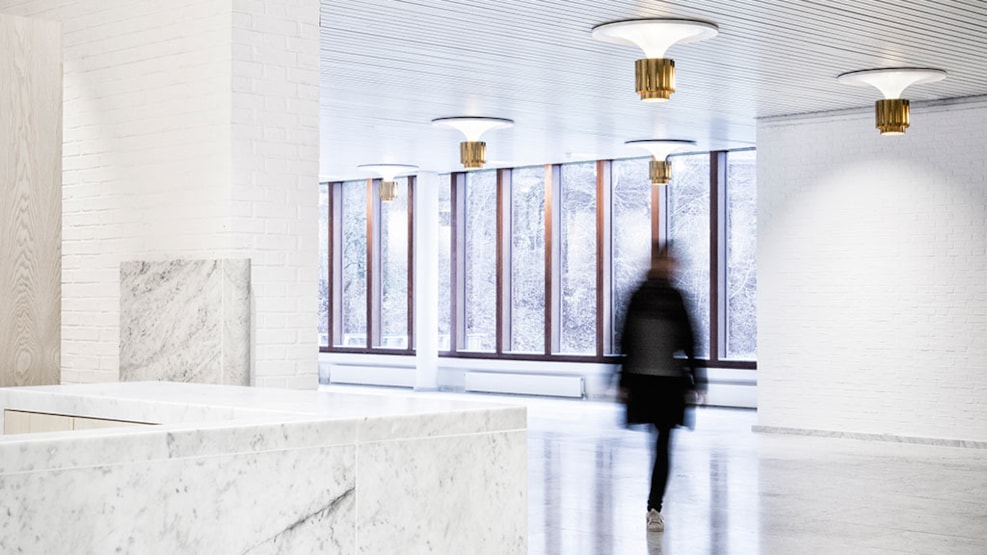 Kunsten is like a sculpture growing out of the greenery around it to create a beautiful frame for world-class art. Every year Kunsten welcomes countless guests to explore the collection of modern art.

Kunsten – the Museum of Modern Art in Aalborg – has recently been renovated, leaving the architectural gem with a new look when it reopened in 2016. The building is in a league of its own internationally, and it was designed by the world famous Finnish architect Alvar Aalto in collaboration with Elissa Aalto and Jean-Jacques Baruël.

Kunsten opened in 1972, but after the renovation it looks as if it was built just yesterday. The thorough renovation brought along a new gallery, new classrooms, a new café and shop, and a new large terrace. In addition, 317 tons of marble have been replaced, both on the inside and on the outside of the museum. This means that both locals and tourists flock to the museum in Aalborg to go on an adventure in the incredible building and to see the unique collection of both modern and contemporary art. A system of moveable walls makes it possible to adjust the size and appearance of the galleries depending on the requirements of the specific exhibition. In addition, the museum is famous for allowing natural light into the building trough unique parabola-shaped skylight constructions.

A high-quality holistic experience is a guarantee at Kunsten, whether you visit the galleries, the shop or the café, and there is every reason to look forward to a visit to Kunsten.

Is it possible to do a thorough renovation of a preserved building without destroying the original architecture? This was the difficult challenge faced by Kunsten prior to the renovation in 2015.

Kunsten is an architectural gem dressed in white marble. The museum holds a unique collection of modern art and changing art exhibitions from both Danish and international artists. The collection is, however, not the only unique feature – the building is unique as well. It is the only museum outside of Finland designed by the Finnish architect Alvar Aalto.

In 1957, he made the first sketches of the museum in collaboration with Elissa Aalto and Jean-Jacques Baruël. The result was a museum beautiful enough to qualify as a work of art in itself. The building is light and organic, and everywhere the materials are unique with custom-made Aalto copper lamps hanging from the ceilings, and marble floors and outer walls.

Kunsten is a preserved building, and the plans to renovate the building thoroughly came as a surprise to many.

A modern and functional museum

Erik Møller Arkitekter, a company with plenty of experience, carried out the renovation. The company has, for example, been in charge of renovating The Royal Danish Theatre and Amalienborg, the royal palace, in Copenhagen. Their ambition was to create a modern and functional museum within the existing frame. The project cost 130 million DKK and it was finished in January 2016, when the museum reopened.

The six pieces were created between the 1930s and today. In Kunsten’s collection, you will find the only two pieces by Michelangelo Pistoletto owned by Danish museums, and with the gift from the New Carlsberg Foundation, yet another Michelangelo Pistoletto piece has been added: a large mirror installation, which will be part of the permanent collection at the museum.

Read more about Kunsten in Aalborg...

Around the museum, signs and displays are written in English. Temporary exhibitions are often accompanied by information in text, audio or via QR-codes; this will also be available in English. Brochures and written information in English are provided, and guided tours can be arranged to accomodate English speaking guests.