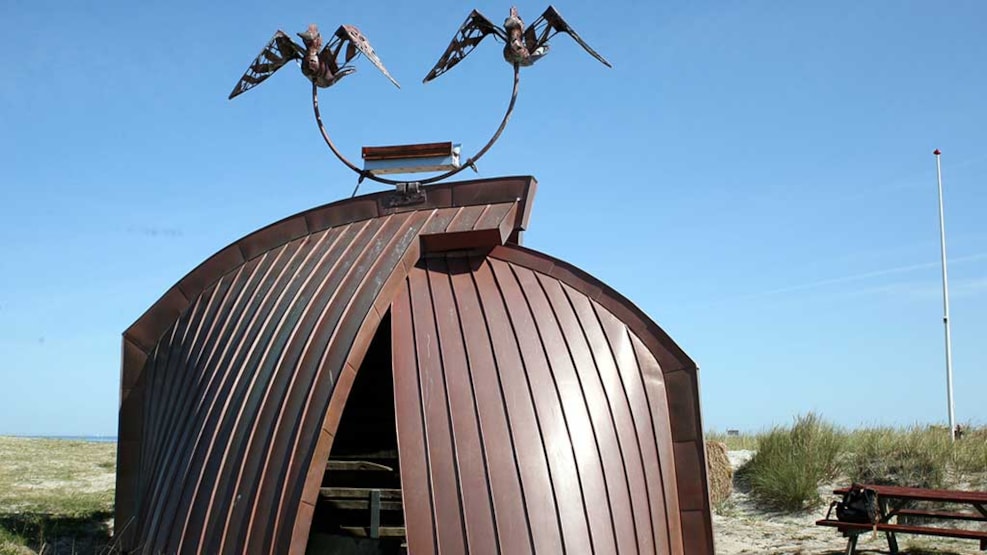 By the end of the pier in Hou, where Nordstranden begins, a sculpture of a wind harp was erected in 1994. The sculpture was designed by Bjarne Jerup Høj and consists of two ship-halves from Hirtshals.

At the top of each half, both of which are front-halves, two great, sheet iron birds have been attached. They soar above the wind harp on each their own pipe as a symbol of the animals of the wind, looking towards the fishing town.

With the introduction of the wind harp, the harbor finally had a unique feature, so sailors could find the Hou harbor and distinguish it from others. As such, the sculpture has helped with not only boosting Hou’s reputation as a town of art, but also with putting it on the map.

Beautiful notes from the wind harp

The wind harp makes music via the wind (quite logically). The wind blows through a wide funnel and is then pressed through a narrow passage, where nylon-strings of varying thickness have been stretched across. the strings are attached to a soundboard, which vibrate when the win hits the strings. The music only plays when the wind blows west, due to the placement of the sculpture.