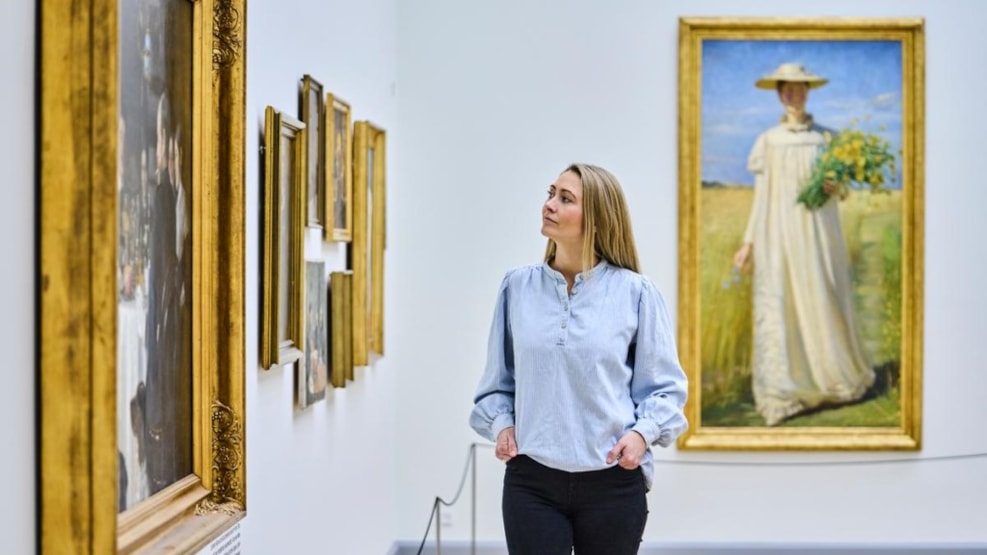 Skagen’s Museum is an internationally reputable museum dedicated to the painters of Skagen, the artist colony with painters such as Krøyer, Anna & Michael Ancher, Tuxen and others, who settled in Skagen in the 19th century.

Today Skagen’s Museum contains around 1900 sculptures, drawings and paintings mainly made by artists who visited Skagen in the period from 1870-1930. Although you might not be particularly interested in art, you should not miss a visit to this museum, when you are in Skagen. Not only will you find world-class art, but also the atmosphere of Skagen, which has made it the city it is today. Read below about the history of the museum, about the painters of Skagen and get a virtual tour thanks to the Google Art Project.

Skagen’s Museum was founded in the dining hall of Brøndums Hotel in 1908 by the painters Ancher, Krøyer and Tuxen along with hotel owner, Degn Brøndum and pharmacist Victor Christian Emanuel Klæbel. The purpose was to exhibit the works of the Skagen painters and raise funds for the construction of a museum. At first, the technical college was used for exhibitions, but after the painter, Krøyer died in 1909, his residence was put to use. In 1919, Degn Brøndum donated the old garden of his hotel to the museum. The construction of the museum began in 1926 from blueprints by the architect Ulrik Plesner. The opening of the museum took place on the 22nd of September 1928 with a collection of around 325 works - many which had been donated by the artists themselves.

The museum in Skagen was expanded several times as a result of the great interest for the painters of Skagen. In 1930, Plesner drew a suggestion for an expansion, but it wasn’t until 1982 that they became a reality. Since then expansions to the museum have followed in 1989, 2004 and in 2014 renovations and expansions started once again.

The painters of Skagen

“Skagensmalerne” is the name of the artist colony, who settled in Skagen in the 1870s to portray the life in Skagen, the rough living conditions of the fishermen and the grand nature with the special light, which makes both Skagen and North Jutland a popular destination. The painters brought their brushes and easel into the nature and painted what they saw. The style, also called realism, influenced all of Europe in this period and has helped with the steady flow of artists, which is why we today speak of the painters of Skagen as an artist colony.

Among the most known painters from Skagen is P. S. Krøyer, who painted the world famous “Hip Hup Hurra” painting for a birthday in Skagen, Anna & Michael Ancher, Laurids Tuxen, Christian Krohg and Holger Drachmann.

Skagens Kunstmuseer provide brochures and written information in English, and around the museum signs and displays are partly in English. Also, guided tours can be arranged to accomodate English speaking guests.

Google has made it possible to visit the museum online through the Art Project. However, we do recommend the physical experience. Visit Skagen's Museum with the Google Art Project