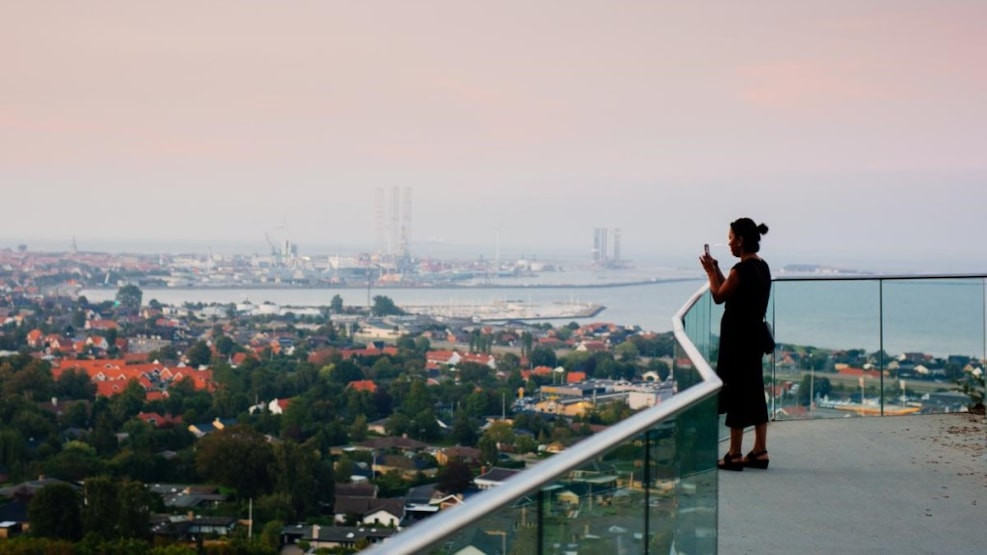 Get the best view of Frederikshavn from the unique viewing platform on Pikkerbakkerne.

The platform on top of Pikkerbakker offers a unique view of the city, the harbor and Hirsholmene with a view to both Sæby and Skagen - in clear weather also Læsø.

Pikkerbakken is part of a 3 km long coastal slope formed by the Yoldia and Litorina seas during the ice age. Pikkerbakken itself rises 71 meters above sea level.

Between Bangsbo and the coast, the landscape is characterized by the high inland slope that stretches from Gedebjerg in the south to Pikkerbakken in the north. The highest point is Øksnebjerg 95 meters above sea level. Behind the slope is Vrangbækdalen, where Bangsbo Å runs, and further west Flade Bakker which reaches up to 122 meters.

After an English attack on Fladstrand in 1809 during the English War (1807-14), an observation post was set up on top of the 71 meter high Pikkerbakken.

During World War II, the first German troops appeared on Pikkerbakken already a few days after the occupation. Here they set up the first 'Flak und Sperrbatterie Frederikshavn Süd', which was to be part of the protection of troop shipments via the port of Frederikshavn.

When the war in 1943 took on the character of a defensive war for the Germans, the fortress around Pikkerbakken was expanded to a total of 70 concrete plants. The positions in the area included a flak battery for shelling air targets, a coastal battery with the artillery ship Niels Juel's cannons, a radar system and the North Jutland commander's command bunker.

Today, the command bunker is designed as a museum and open to the public.

After the occupation, the Danish Navy took over the positions, and during the Cold War, naval station Frederikshavn played an important role in protecting the waters between Norway and Denmark. Today the maritime surveillance in the area from the Great Belt to Skagen is still managed from the Kattegat Marine District on Pikkerbakken.