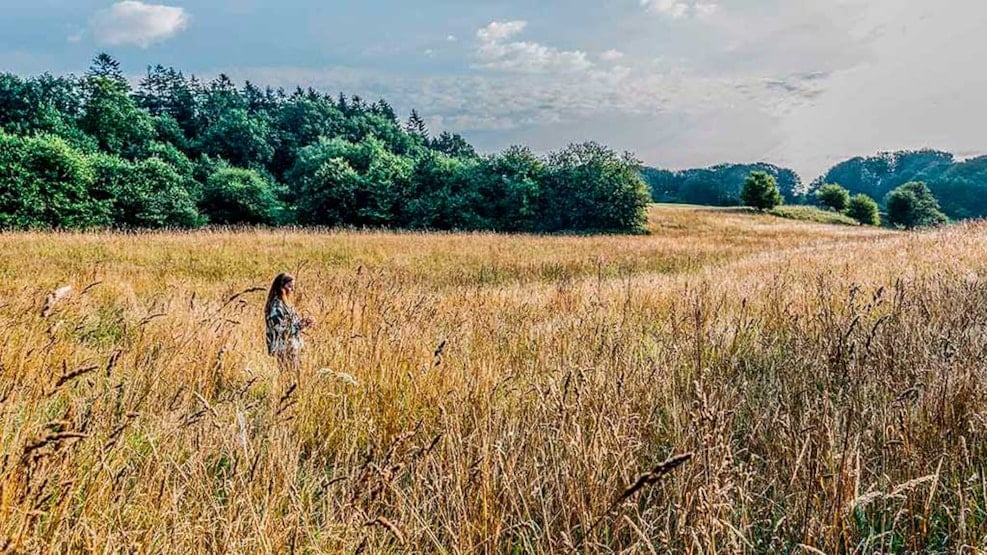 Melting ice, rock, gravel, clay and sand formed 15,000 years ago what today is known as Jyske Ås (The Jutlandic Esker), which resounds with stories from the Ice Age - listen, maybe you can sense the faint whisper of interesting stories in the fresh wind.

The ridge of Vendsyssel

Jyske Ås is hilly ridges formed by glaciers during the last ice age. It stretches over 38 km down through Vendsyssel and has a width of more than two kilometers. 39 of the hill's hilltops are higher than 100 m above sea level, and ”Knøsen” is with its 136 m the highest point in all of North Jutland.

Jyske Ås is not, despite its name, an Esker. It was created during the last ice age. The entire terrain around Dronninglund is very hilly. Exciting long barrow and burial mounds are scattered in the area.

The area has several different, exciting hiking trails and bike routes. In the unique terrain you will experience a rich wildlife and beautiful nature, while you feel the Jyske Ås under your shoes.

Remains from the Ice Age

Over 15,000 years ago, a mighty glacier came from Russia. The ice made it across the bottom of the Baltic Sea, crawling up over the rock formations of Scania and Halland, where it broke large pieces of solid bedrock. It then dived into Kattegat, where it pushed large amounts of rock, gravel, sand and clay, and brought it to North Jutland.

In the area East Vendsyssel the glacier stopped. In cold periods it slid slightly forward, and in heat it retreated, until an uninterrupted period of heat caused the ice to melt in large rivers. The melting ended about 12,000 years ago, leaving behind the material that the ice mass had brought on its way. The clay was carried away by the meltwater and can today be seen as large slopes at Bulbjerg, Lønstrup and Nr. Lyngby. The rest is spread out in the sliding direction of the ice southeast / northwest.

In the unique and quite untouched nature you will find rare flowers and plants. You will also find a rich wildlife, and it is possible to see steelworms, Eurasian jays and rare frogs.

The ridge is full of bicycle and hiking trails, with primitive campsites along the routes.

In Jyske Ås, three large rivers originate: Voraa, which flows into Kattegat, Uggerby Å, which flows north and empties into the North Sea, and Ryå, which after a winding course ends in the Limfjord a little west of Nørresundby.

Visit the Gate to Jyske Ås

Visit the Gate to Jyske Ås near Klokkerholm and learn more about the nature, geology and cultural history around Jyske Ås.

You will find the gate at Landvadhøj 16, 9320 Hjallerup at motorway exit no. 15, Jyske Ås on E45 towards Frederikshavn.