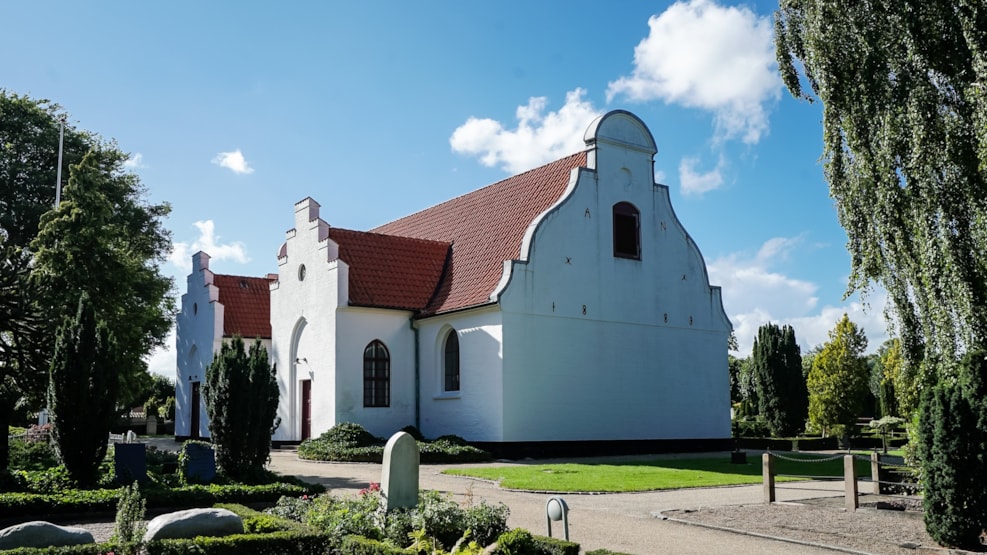 Fladstrand Kirke is rich in historical memories, though small and modest, and is the oldest urban church in Frederikshavn. Together with the cemetery, it tells about 300 years of events in Fladstrand, the area that later became Frederikshavn.

A single longhouse in half-timbered was built in 1688-90 and later the swinging gables and porch and parsonage were added. Fladstrand was at the end of the 1600s a small fishing village with almost 25 houses, some of which were outside, and others with land as attachment under the manors Lengsholm and Knivholt as well as a couple under Bangsbo.

The inhabitants belonged to the Flade church, and there was a long way to go. Whether it was the residents' own desire to have a church, or whether it was wealthy and influential people who took the initiative, can stand, but in each case Vice-Admiral Ivar Hoppe and two of his officers from the Scanian war led depending on the construction.

Vice-Admiral Ivar Hoppe secured the permission for a church building at Christian the 5th by a gracious order dated April 27, 1686, to the inhabitants of Fladstrand, that "by virtue of the length and difficulty of their proper parish church, they should build a Church or a Chapel at Fladstrand.

Construction was begun in 1688, it is carved into one of the old herringbones in the northeast corner of the building. It was set on April 24, 1688, and two years later, on May 22, 1690, the church was consecrated.

All Saints Day, a memorial service is held, ending with a wreath laying at the great memorial stone for dead fishermen and sailors.

The city was given an eerily central location during the Second World War, where it was surrounded by bunkers and defenses. served as a shipping port for German troops and naval port for the Navy.

Dramatic events during the war have therefore also marked the large cemetery, where in the northern part some of the largest war graves here at home are found in a large lawn. Immediately north of, there is a smaller section of tombs and memorial stones for English airmen who fell as victims of the war. The memorial stones on the large lawn with the German graves count about 1500 names of both soldiers and refugees, who died in the refugee camps of the area at the end of and immediately after the war.

By far the most part, however, are German soldiers who drowned, when troop transport ships on their way from Frederikshavn to Norway were mined or torpedoed. The first major funerals took place as early as the autumn of 1940, when the troop transport ship "Pioner" was mined, and a few hundred of the victims drifted ashore on the east coast of Vendsyssel.