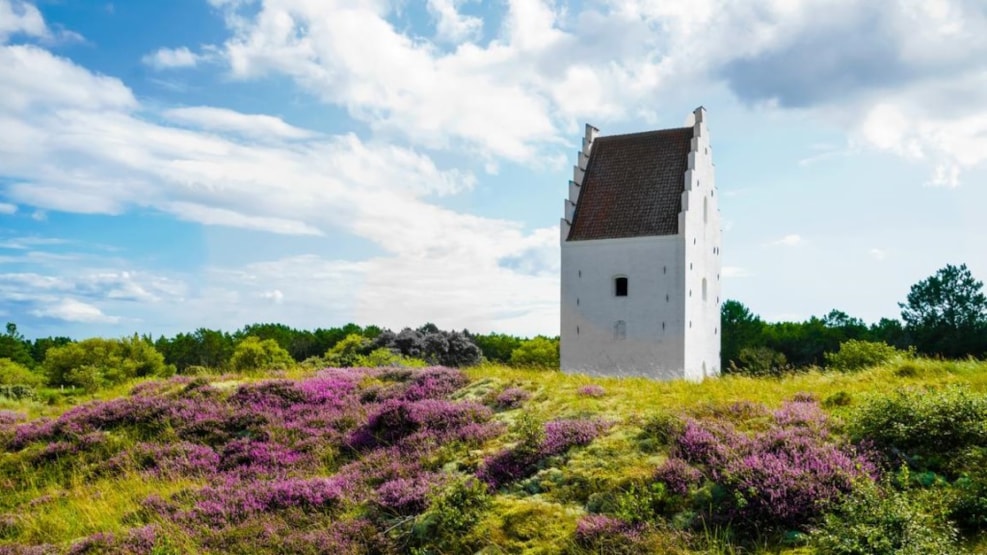 Sct. Laurentii Church is believed to have been built in the second half of the 14th century and was at that time the largest church in Vendsyssel.

In the dunes west of Skagen stands the tower of the old Sct. Laurentius Church, today known as ‘The Sanded Church’. For four hundred years it gathered the congregation, until drifting sand started to block the road and cemetery, and in 1795 the congregation were forced to cease worship, and the church was closed.

Sct. Laurentius was a magnificent church with impressive furnishings, of which now only the altar's two heavy candlesticks remain. They stand on the altar of the 'new' church, Skagen church. Beneath the surface there is still remnants of the church's foundation and floor, as well as a baptismal font that was not - like the rest of the furniture - removed and sold.

Recent studies around the 200th anniversary of the church's closure have helped mark the church's floor plan, including the location of the nave and sacristy, which can be seen behind the tower. Red poles mark the ground plan, while fascines mark the known parts of the old cemetery wall. Many questions are still unanswered, which probably is part of the fascination of the church.

Laurentius (Saint Lawrence) is the patron saint of this and many other west Danish churches. He was the protector of the sailors and the poor and suffered martyrdom on a gridiron. The gridiron can be found in Skagen city coat of arms together with the words " Vort håb til Gud alene/ Our hope to God alone"

In the summer Skagen Church arranges outdoor service every Thursday evening at 19.30 from mid-June to mid-August at the Sanded Church with wind music.

400 m from the sanded church there is a parking lot with a playground, tables, benches and toilets - and during the summer you will find a kiosk, from which tickets are sold to get into the church tower.