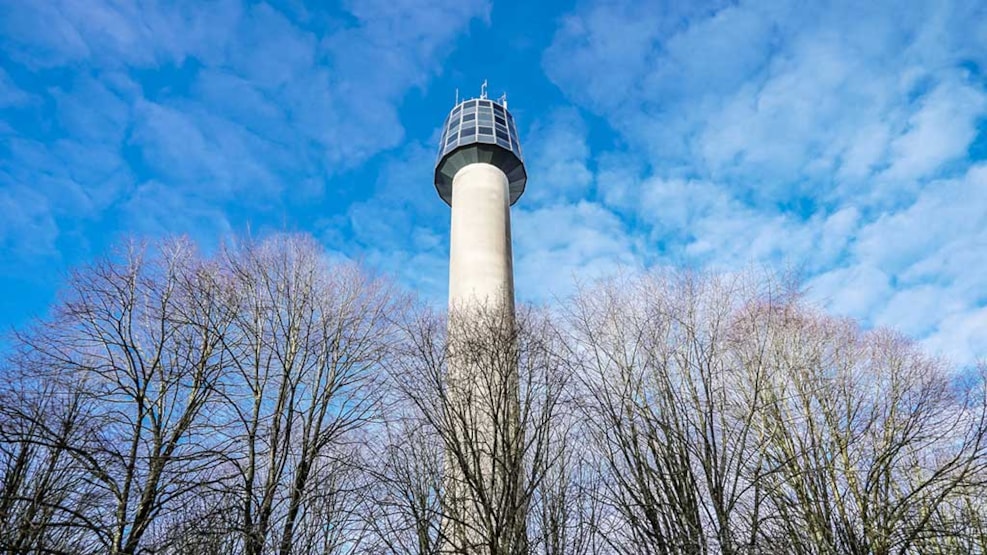 On a clear day you can see Skagen in the north, Læsø in the east, Jyske Ås in the south and Rubjerg Knude in the west. In fact, the whole of Vendsyssel lies at your feet from the highest viewpoint in the region, 160 meters above sea level.

The Cloos tower lies in the hills high above Frederikshavn. The view at the top rises 160 meters above sea level - where the tower itself is 60 meters high and is located in Flade Bakker.

One of the city's more affluent inhabitants, grocer and consul Christian Cloos testified at his death in 1914 the area in Flade Bakker, as well as a sum of money to Frederikshavn Municipality demanding that a lookout tower should be erected by 1962, otherwise the money gift would accrue instead Provincial Trade Stand Support Association. In the time before the tower was built, many projects were stranded on financial or political discord. Only the requirement of realization by 1962 forced a decision through.

The tower was in memory of his parents Consul Christian Ludvig Cloos and Oline Henriette Cloos. It was inaugurated on April 18, 1962 (21 years after the death of Merchant Cloos) and has since served as a landmark for Frederikshavn, visible to all corners of the world as you approach the city.

The tower is today a view tower. There are great views of Frederikshavn and much of Vendsyssel. In clear weather Skagen and Råbjerg are seen in the north, Rubjerg Knude on the west coast, Jutland ridge in the south and the Kattegat islands; Kølpen, Deget and Hirsholmene and Læsø in the east. A breathtakingly beautiful landscape.

The tower has an internal staircase with 315 steps and elevator.

The area around the tower is serene. Here you will find tables and benches where you can enjoy your food or prepare it on the fixed grill in the square. In addition, there is also an ice cream shop and children's playground.

It is possible to find hiking trails to the "Vandværksskoven" and Bangsbo area.